Zed Books presents The Emperor is Naked by Hamid Dabashi 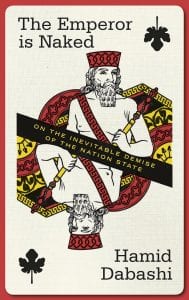 The invention of the nation-state was the crowning achievement of the Sykes–Picot Agreement between the United Kingdom and France in 1916. As a geostrategic move to divide, defeat, and dismantle the Ottoman Empire during World War I, it was a great success and the modern colonial borders of the Arab nation-states eventually emerged in the course of World War II.

Today, as nations are reconceiving their own postcolonial interpolated histories, Arab and Muslim states are becoming total states on the model of ISIS with Iran, Syria, Turkey and Egypt, among others, violently manufacturing their legitimacy. And yet simultaneously, examples such as the Nobel Peace Prize winning formation of a civil society ‘Quartet’ in Tunisia allude to a growing transnational public sphere across the Arab and Muslim world.

In The Emperor is Naked, Hamid Dabashi boldly argues that the category of nation-state has failed to produce a legitimate and enduring unit of post-colonial polity. Considering what this liberation of nations and denial of legitimacy to ruling states will actually unfurl, Dabashi asks: What will replace the nation-state, what are the implications of this deconstruction on global politics and, crucially, what is the meaning of the post-colonial subject within this moment?