The End of Two Illusions by Hamid Dabashi, University of California Press

Dismantling the myths that divide Islam and the West, this cutting-edge work of critical thinking proposes new ways to reread Islamic and world histories.

Extending from the front-page news coverage of our daily lives back into the deepest and most revelatory histories of the last two hundred years and earlier, Hamid Dabashi’s The End of Two Illusions is a daring, provocative, and groundbreaking work that dismantles the most dangerous delusions manufactured between two vastly fetishized abstractions: “Islam” and “the West.” With this book, Dabashi shows how the civilizational divides imagined between these two cosmic binaries have defined their entanglement—in ways that have nothing to do with the lived experiences of either Muslims or the diverse and changing communities scarcely held together by the myth of “the West.”

Through detailed historical and contemporary analysis, The End of Two Illusions untangles the motivations that produced this global fiction. Dabashi demonstrates how “the West” was an ideological commodity and civilizational mantra invented during the European Enlightenment, serving as an epicenter for the rise of globalized capitalist modernity. In turn, Orientalist ideologues went around the world manufacturing equally illusory abstractions in the form of inferior civilizations in India, China, Africa, Latin America, and the Islamic world. The result was the projection of “Islam and the West” as the prototype of a civilizational hostility that has given false explanations and flawed prognoses of our contemporary history, with weaponized Islamophobia on one side and militant Islamism on the other as its most palpable manifestations. Dabashi argues it is long past time to dismantle this dangerous liaison, expose and overcome its perilous delusions, and reimagine the world beyond its shimmering mirage. The End of Two Illusions is the most iconoclastic work of critical thought and scholarship to emerge in recent memory, clearing the way toward a far more liberating imaginative geography of the world we share. 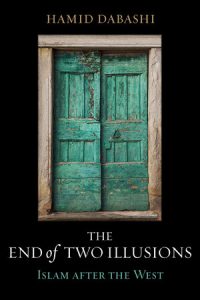