Memoirs of a Dalit Communist The Many Worlds of R.B. More edited by Anupama Rao 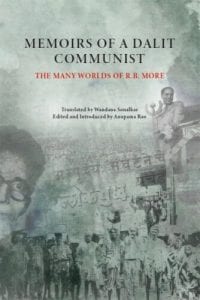 Memoirs of a Dalit Communist

The Many Worlds of R.B. More

R.B. More (1903–1972) was a leader in Babasaheb Ambedkar’s movement, a trade unionist and a member of the Communist Party of India (Marxist). More’s life, narrated in his words and those of his son Satyendra, illuminates the conflict between the promise of Marxist emancipation and the hard reality of the hierarchies of caste. His radicalism challenged both the limits of the politics of caste and the politics of the Left; his was a politics that frontally challenged the rigidities of the caste system and of the class structure. This memoir, written in Marathi, is here published for the first time in English. This is a rare work that brings together family history, political thought, and the social experience of urban workers whose lives are intertwined with the city they built, Bombay.