I Am the People: Reflections on Popular Sovereignty Today by Partha Chatterjee 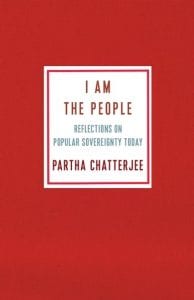 The forms of liberal government that emerged after World War II are in the midst of a profound crisis. In I Am the People, Partha Chatterjee reconsiders the concept of popular sovereignty in order to explain today’s dramatic outburst of movements claiming to speak for “the people.”

To uncover the roots of populism, Chatterjee traces the twentieth-century trajectory of the welfare state and neoliberal reforms. Mobilizing ideals of popular sovereignty and the emotional appeal of nationalism, anticolonial movements ushered in a world of nation-states while liberal democracies in Europe guaranteed social rights to their citizens. But as neoliberal techniques shrank the scope of government, politics gave way to technical administration by experts. Once the state could no longer claim an emotional bond with the people, the ruling bloc lost the consent of the governed. To fill the void, a proliferation of populist leaders have mobilized disaffected groups into a battle that they define as the authentic people against entrenched oligarchy.

Once politics enters a spiral of competitive populism, Chatterjee cautions, there is no easy return to pristine liberalism. Only a counter-hegemonic social force that challenges global capital and facilitates the equal participation of all peoples in democratic governance can achieve significant transformation. Drawing on thinkers such as Antonio Gramsci, Michel Foucault, and Ernesto Laclau and with a particular focus on the history of populism in India, I Am the People is a sweeping, theoretically rich account of the origins of today’s tempests.