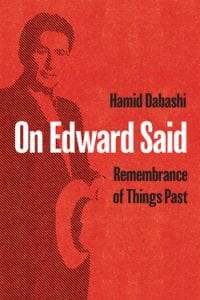 An intimate intellectual, political and personal portrait of Edward Said, one of the 20th centuries’ leading public intellectuals.

Edward Said (1935-2003) was a towering figure in post-colonial studies and the struggle for justice in his native Palestine, best known for his critique of orientalism in western portrayals of the Middle East. As a public intellectual, activist, and scholar, Said forever changed how we read the world around us and left an indelible mark on subsequent generations.

Hamid Dabashi, himself a leading thinker and critical public voice, offers a unique collection of reminiscences, travelogues and essays that document his own close and long-standing scholarly, personal and political relationship with Said. In the process, they place the enduring significance of Edward Said’s legacy in an unfolding context and locate his work within the moral imagination and environment of the time.