Mestizaje in Arab Amairka, a lecture by Sarah Gualtieri

Sarah M.A. Gualtieri presents a portion of her new book Arab Routes: Pathways to Syrian California (Stanford University Press, 2019). Her talk draws on the discourse of mestizaje, or mixture and cultural hybridity, in order to revisit central themes in the history of Arab America. It uses the example of Hajj Ali, or “Hi Jolly,” an Ottoman camel-handler in the U.S. military expedition toward California in 1857, to discuss migration and mobility in the early Middle Eastern American diaspora. Rather than reproduce a reading of Hajj Ali as “an early Arab American,” a patriotic Muslim, and one of the “first” Syrians in the United States, Gualtieri explores his marriage to a Mexican American woman in Arizona as a way to rethink idealized notions of family and community in Arab American historiography. She proposes mestizaje as a useful interpretive framework for focusing on the overlooked histories of inter-ethnic contact and Latino/a-Arab interchanges in the US-Mexico borderlands. 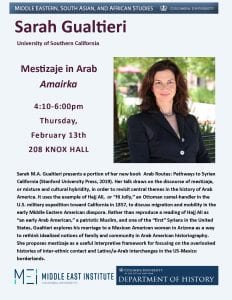