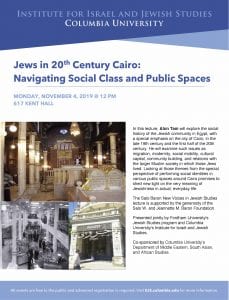 In this lecture, Alon Tam will explore the social history of the Jewish community in Egypt, with a special emphasis on the city of Cairo, in the late 19th century and the first half of the 20th century. He will examine such issues as migration, modernity, social mobility, cultural capital, community building, and relations with the larger Muslim society in which those Jews lived. Looking at those themes from the special perspective of performing social identities in various public spaces around Cairo promises to shed new light on the very meaning of Jewishness in actual, everyday life.