Between Tradition And Transformation: Shabbat Musical Practice In The Jewish Community Of Istanbul 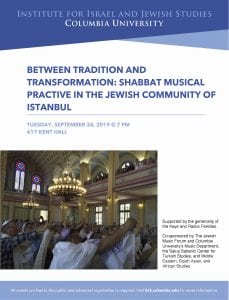 This talk will be about ongoing transformations in the sacred musical repertoires practiced by ḥazzanim (synagogue cantors) and their synagogue congregations in Istanbul’s contemporary Jewish community. Dr. Alpar argues that clergy and laypeople alike negotiate their religious identities as Turkish Jews in the musical choices they make. While many try to maintain the community’s local music tradition, rooted in makam—the Ottoman Turkish melodic system—others attempt to broaden their repertoire with musics from Israel, the United States, and Ḥabad Hasidic Judaism. He will examine adjustments made to the musical components of ritual as responses to decades of Jewish religious life as experienced under the authority of the secular Turkish state and to the resurgence of religious observance within certain segments of the Jewish community. Newly religious and spiritually searching Jews now have a conflicted relationship with their community’s historic, sacred musical practices, appreciating their cultural significance but questioning their relevance and efficacy. He asserts that ḥazzanim and community members articulate ambivalent and changing attitudes about their Jewish identities, memory, and the value of local tradition in their diverse approaches to making sacred music. Based on more than two years of ethnographic fieldwork in Istanbul’s Jewish community, Dr. Alpar’s talk investigates the tension between their loyalty to tradition and the freedom and fear of being liberated from it.