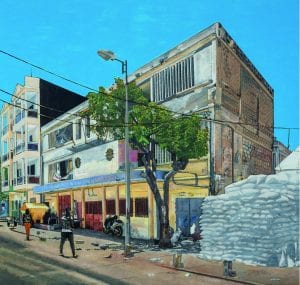 Alain Badiou is a French philosopher and playwright.
He is a professor emeritus at the Department of
Philosophy of the École Normale Supérieure in
Paris. His major works include the philosophical
trilogy Being and Event, Logics of Worlds, and The
Immanence of Truths. His philosophical oeuvre
connects continental and analytical philosophical
traditions along with his reflections on set theory
and contemporary mathematics.

Cheikh Ndiaye is an artist who divides his time
between New York, Dakar, and Lyon. His work
includes paintings, installations, and film. Ndiaye
has shown his works internationally, including
at Centre Pompidou; La Maréchalerie Centre
d’Art Contemporain; Dak’Art Biennale; the 56th
International Exhibition of the Venice Biennale
and the 2019 Havana Biennale. Recently, Ndiaye’s
work was included in Sanguine. Luc Tuymans on
Baroque at Fondazione Prada in Milan, Italy, and in
Domestic Horror at Gagosian Gallery, NYC. Ndiaye
is represented by Cécile Fakhoury Gallery, Abidjan
and Jason Haam Gallery, Seoul. He is one of the
founders of the publishing house Suture Press.