Comparative Studies of South Asia, Africa and the Middle East 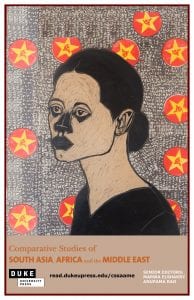 CSSAAME brings region and area studies into conversation with a rethinking of theory and the disciplines. The journal attends to the specificity of non-Western social, political, and intellectual formations as these challenge the norms and assumptions of scholarly paradigms generated in the north Atlantic.

Graduate students in MESAAS and other Columbia Departments serve as editorial assistants for the journal. They also produce an online journal, Borderlines , in association to CSSAAME.