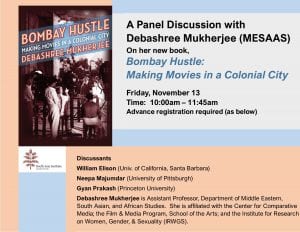 Advanced registration required to attend the event – Follow this link.  After registering, you will receive a confirmation email containing information about joining the meeting.

William Elison is Associate Professor, Department of Religious Studies, University of California, Santa Barbara.  An ethnographer and historian, he works in the areas of South Asian Religions, Religion and Media, and Visual Culture. Much of his work has focused on the problem of mediation of subject positions by visual forms such as sacred icons and popular cinema.  His most recent publication is The Neighborhood of Gods: The Sacred and the Visible at the Margins of Mumbai (2018), which was part of the South Asia Across the Disciplines Series, a joint venture of the university presses at Berkeley, Chicago, and Columbia.

Neepa Majumdar is an Associate Professor of English and Film and Media Studies at the University of Pittsburgh. Her research interests include star studies, film sound, South Asian early cinema, documentary film, and questions of film history and historiography.  Her book Wanted Cultured Ladies Only!: Female Stardom and Cinema in India, 1930s to 1950s (2009) won an Honorable Mention in the 2010 Best First Book Award of the Society for Cinema and Media Studies. Her essays have appeared in The Canadian Journal of Film Studies, South Asian Popular Culture, and Post Script, and various anthologies on sound in film and film analysis.

Debashree Mukherjee is Assistant Professor, Department of Middle Eastern, South Asian, and African Studies.  She is affiliated with Center for Comparative Media; Film & Media Program, School of the Arts; Institute for Research on Women, Gender, & Sexuality (IRWGS).  Prof. Mukherjee is a film historian and media theorist working across the fields of production studies, new materialisms, feminist film historiography, postcolonial studies, and South Asian studies. Her new book, Bombay Hustle: Making Movies in a Colonial City (Columbia University Press, 2020), presents a practice-oriented history of the consolidation of the Bombay film industry in the 1930s. The book investigates the material relations between cinema’s bodies, machines, aesthetics, and environments as they intersect with practices of modernity and freedom in late colonial India.

Gyan Prakash is the Dayton-Stockton Professor of History, Princeton University. His general field of research and teaching interests concerns urban modernity, the colonial genealogies of modernity, and problems of postcolonial thought and politics.  Until the dissolution of the Subaltern Studies group in 2008, he was a member of its editorial collective, actively involved in the publication and other intellectual activities of this group of scholars. His most recent publication is Emergency Chronicles: Indira Gandhi and Democracy’s Turning Point (2019)