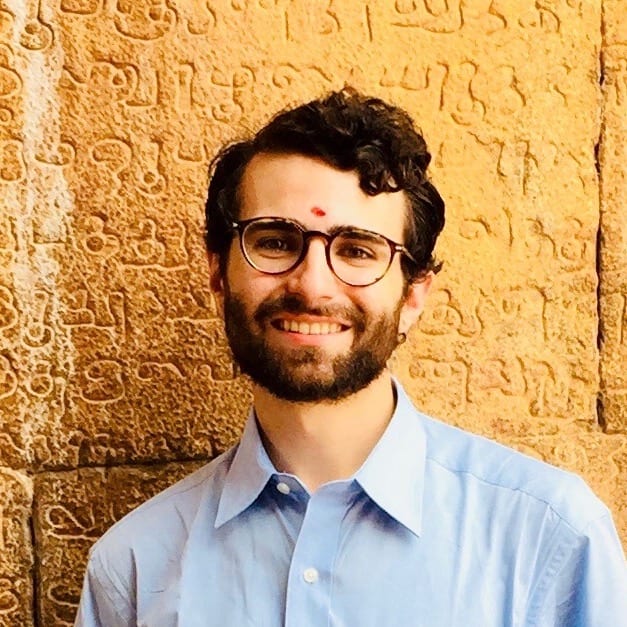 Tyler M. Richard is a poet, translator, and scholar of South Asian literature. He received his AB in philosophy and South Asian studies from Harvard University, where he is currently a PhD candidate in South Asian studies. In addition to completing his doctoral work, Tyler also serves as a Lecturer in Sanskrit at Columbia University in New York City.

Tyler’s main research interest consists in exploring how different communities—especially those in South Asia—have articulated and explored questions related to beauty, identity, language, and perception. In particular, he studies literature and literary theory written in Sanskrit and Tamil with an eye for comparison across time, space, and disciplinary method. At the moment, he is working on projects related to Bāṇa’s Kādambarī, Kuntaka’s Vakroktijīvita, and Cīṉiccarkkarai’s Pukaiyilai Viṭu Tūtu.

In the summer of 2018, Tyler was a visiting fellow at Tamil University, Thanjavur, where he studied Old Tamil grammar and poetry with the scholars Ku.Ve. Balasubramaniam and A. Dakshinamurthy. His most recent publication is a Harvard Business School case study entitled “The Dance of Dharma: On the Difficulty of Being Good,” co-written with Arthur I. Segel in collaboration with Gurcharan Das.

When he is not in New York or Tamil Nadu, Tyler spends his time back home on the range in Utopia, TX.